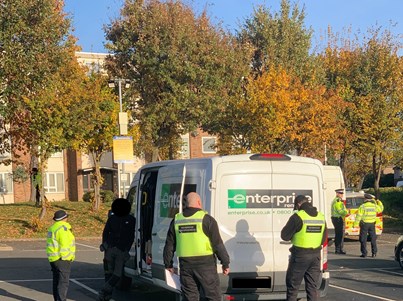 Redbridge Council is clamping down on rogue waste removal services and reminding residents to check rubbish removal companies they hire are legally registered, to avoid breaking the law.

The move comes as several fly-tips in Redbridge were found to be dumped by illegally operating waste removal services. Instead of responsibly disposing of the waste they had been hired to remove, the rogue operators ended up dumping it on the borough’s streets instead.

Redbridge householders and businesses are being reminded not to fall foul of the law by taking steps to ensure anyone hired to remove waste from their property is authorised to do so with the correct Waste Carriers Licence.

Failure to do so could end up in court-imposed costs and a criminal record if your waste is discovered fly-tipped and you cannot provide evidence of who you gave it to for removal or neglected to check if they had a valid Waste Carriers Licence.

Redbridge Cabinet Member for Environment and Civic Pride Cllr Jo Blackman said: “Often these rogue operators charge hundreds of pounds to remove people’s rubbish, only for it to end up dumped on the streets. Our residents and businesses can help stop this from happening by ensuring they carry out a few simple checks when hiring a waste removal service. We all have a duty to help keep our borough clean.”

The comments follow a recent council led operation held in conjunction with the police, which targeted commercial vehicles transporting waste.

The three-hour operation in Chadwell Heath resulted in hefty fines for those who were stopped and failed to produce their Waste Carriers Licence. A total of £900 was given out in fines on the day.

A similar operation was also run in Seven Kings and Chadwell towards the end of last year and resulted in several commercial vehicles found to be removing waste illegally without a valid Waste Carriers Licence. All were fined a maximum of £300 each.

As part of the crackdown the council also successfully prosecuted two men from west London whose rubbish from a house renovation was found dumped in Redbridge.

It came to light they paid £300 in cash to a group of men with a van, who had offered to dispose of the rubbish, which later emerged discarded in Ilford and traced back to the west London residents by Redbridge Enforcement Officers.

Barkingside Magistrates Court heard how both men had failed to do a Waste Carriers Licence check. They also neglected to record the names, addresses and the vehicle registration plate of the men they had tasked with removing their rubbish –leaving the culprits who trashed the brough’s streets unidentifiable.

Both were found guilty under the Environmental Protection Act 1990 and given a Conditional Discharge of 12 months. Alongside gaining a criminal record, they were also ordered to pay court and council costs, as well as compensation for clearing the fly-tipped waste, totalling £2450.

If hiring a private contractor to remove household, garden, or construction waste remember to:

You can check using either their registration number, business name, or postcode, or call the Environment Agency on 03708 506 506.

Businesses in the borough can also access a Commercial Waste Collection Service through the council.